Around the World on a Bicycle is foremost a travel story, a chronicle of the adventures and discoveries of a young cyclist. But, author Fred A. Birchmore moved through a world on the brink of global war. Allusions to growing unrest can be found throughout his book, some of which are gathered here. Together they constitute a subtext that readers—of history, especially—might notice as they follow the main story.

Beyond recollections that might hint at the coming Second World War, Birchmore's story is also rich in references to colonial structures that would collapse during or soon after the war. Most notably, the African, Middle Eastern, and Asian countries through which Birchmore travelled were often within British and French colonial spheres. Police, customs officials, soldiers, bureaucrats, politicians, and others: each encounter Birchmore mentions is a reminder of huge, complex systems of governance and commerce that would not survive the war.

"I was constantly passing soldiers, tanks, giant air fleets and artillery. Nearly every community boasts of barracks and forts where the government maintains its youth, training them for war."

Birchmore made this observation in 1935, when recounting his return to Germany after a trek through Scandinavia. He also writes about his time at the 1936 Winter Olympics. Hosted by Germany, they were a showcase for the massive propaganda campaign that paralleled the country's rise as a military power. These photos, taken by Birchmore at the games, hint at the ubiquity of Nazi symbolism there. The first, of Birchmore himself, shows swastika banners in the background. Birchmore took the second photo to document one the many old mountaineers he encountered (and admired) in the alpine regions of Germany, Austria, and Switzerland. By chance, the photo also captures a now iconic (infamously so) Olympics poster that illustrates the heroic, future-facing, over-the-top style of illustration favored by Nazi propagandists.

(l) to (r): Birchmore at the 1936 Winter Olympics; an old alpine mountaineer, also at the winter games; and an Olympics poster.

A firsthand brush with fascism in Italy

"Just as we shot out of the tunnel . . . we ran head-on into an array of gleaming bayonets. I asked the men behind the guns where we might find lodging for the remainder of the night. They assured us that we need not worry about such small matters, for Mussolini, the Keeper of the Peace, would provide. We were promptly escorted into army headquarters. . . . Upon reaching headquarters, our worthy sergeant announced our title in a loud voice: 'Spies.'"

In 1936, on Birchmore's second tour of Italy, he and traveling companion Harry Espenscheid were detained by soldiers on suspicion of being American spies. Birchmore had already taken a dislike to fascist troops during his first trip through Italy in 1935, having witnessed them "strutting about like bantam roosters." In 1935, on his way from Naples to Pompeii, a route filled with reminders of the country's often unhealthy and impoverished state, Birchmore notes with irony that "battalions of Italian soldiers passed, on their way to 'clean up' other countries and make them nice refined places like Italy!"

News of the Spanish Civil War from a friend

"This tall vagabond whom I had last seen on the cliffs of Dover had spent so much time lately in torrid Spain that he was now cooling off and resting for a few weeks in the Bavarian mountains. Spain was still reeling from its civil war." 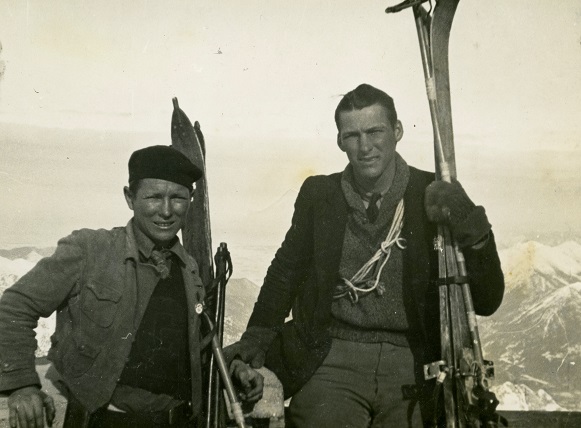 Birchmore (l) and occasional traveling companion Ballard Donnell (r) in Germany. Donnell was there on a respite from his wanderings in Spain.

Birchmore ran into his occasional traveling companion, Ballard Donnell, at the 1936 Olympics. It was a time to do some exploring together—and also to catch up on news. Birchmore offers no more details of what Donnell had witnessed in Spain, though an atmosphere of war would have been hard to miss almost anywhere in that country.

A close-up look at the British fleet in Alexandria

"We wound through the entire British fleet, finally anchoring beside a great airplane carrier in the middle of the harbor. Hundreds of lights in the immense ships made them glow like huge phosphorescent bugs or caterpillars." 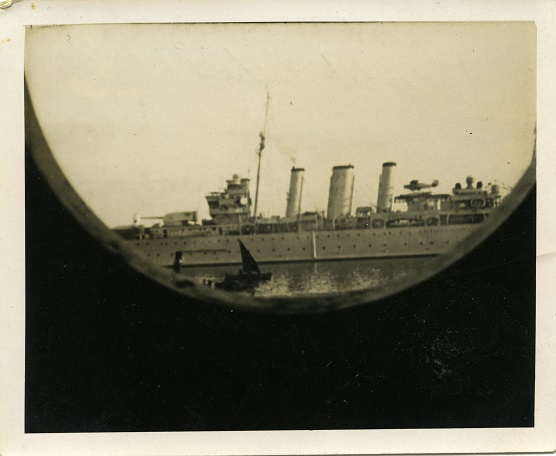 A British warship in Alexandria harbor, seen through a porthole in the Vesta.

A large number of warships was the first sight that greeted Birchmore when he arrived in the Port of Alexandria in mid-March 1936 aboard the Vesta, a freighter that had taken him from Greece to Egypt, via Cyprus. Britain's formidable Mediterranean Fleet had long been headquartered in Malta. By the mid-1930s, however, as Europe moved into World War II, Britain had concerns about Germany attacking the fleet from bases in nearby fascist Spain. The significant presence of British warships in Alexandria that Birchmore noted was likely related to the change of fleet headquarters from Malta to Alexandria.

An influx of European refugees into Palestine

"It was a strange spectacle to see German Jews of our modern civilization mingling with peasants whose development was still in the past ages." 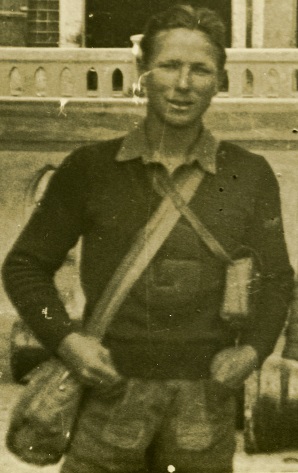 Birchmore wearing his Univerity of Georgia "G" sweater, which played a part in some misunderstandings while he traveled through Palestine.

Birchmore entered Palestine in April 1936—right at the start of the "Great Revolt" of 1936–1939. It was an extremely tense and often violent time for all, but particularly for relations between the colonial British administration, Palestinian Arabs, and recently arrived Jewish immigrants. The largest percentage of Jewish refugees arriving in Palestine, around the time Birchmore was there, were from Germany. Birchmore rode a German bike packed with German travel gear. He often wore a sweater of red and black (two colors closely associated with Germany at the time) with a large block G on the front. His appearance led to misunderstandings in Palestine, and made clear to him the seriousness of the situation.

"The recent estrangement of American-Persian relations . . . was being 'backfired' against the few Americans who happened to be in Persia at the time. My American passport meant very little to Persian officials save as incriminatory evidence of my status as an American citizen. This was even more disreputable in the eyes of the Persian government than if I had been a Russian Communist. No Americans in the country were allowed to receive foreign newspapers or printed matter of any sort, and all personal letters were censored."

During Birchmore's time in Persia in May 1936, relations with the US were severely strained. They would even be suspended at times in coming years. Two public incidents, and their subsequent handling, seemed to precipitate these troubles—although bigger underlying issues were likely in play. In late 1935, the diplomatic immunity of the Iranian Minister to Washington was violated when he was arrested by local police in Maryland over a traffic violation. Then, in early 1936, an article in the New York Daily Mirror mentioned an aspect of the Iranian Shah's boyhood which was taken as an insult to him. At the time, Persia had strong economic ties with Germany. This was a source of concern for both Great Britain and the Soviet Union (two other powers—and future US wartime allies—who were vying for influence in the country).