1. In nomine Jesu Amen, In the name of Jesus, Amen.

2. During Oglethorpe’s absence, Maj. William Horton was the senior officer at Frederica.

3. Boltzius spoke highly of Dr. Thilo in his reports, but less so in his private letters, which mentioned frequent occurrences of insanity.

4. (Johann) Ludwig Meyer, a barber surgeon who came with the fourth Salzburger transport, helped Boltzius in many secular duties.

7. The “order of salvation” was the theological steps of confession, repentance, and absolution by which one was saved.

8. Mrs. Anna Kurtz was the widow of Matthias Kurtz, a Salzburger from Dürrenberg, who had emigrated to Cadzant and later to London before being taken to Ebenezer by Heinrich Melchior Muhlenberg in 1742.

9. “Every word that proceedeth from the mouth of God.”

10. John Wesley had refused to give Holy Communion to Boltzius because the latter had not received the “laying on of hands” in the Apostolic Succession.

11. At this time in Georgia the word “Frenchman” often designated a French Swiss, particularly if he were from Purysburg.

12. The Kieffers of Purysburg had often been rowed to Ebenezer by black slaves, who even attended church.

1. Mrs. Driesler was the widow of the late German pastor Johann Ulrich Driesler at Frederica, who had died after only four years of service.

2. Ruprech Kalcher and his wife Margaretha, nee Gunther, were a selfless and saintly couple who had managed the orphanage.

4. Friedrich Curtius (Kurtz), a swindler, who cheated Bichler and other Salzburgers in a lumber operation.

5. “Legalistic” meant based on the law of the Old Testament, rather than on the grace of the New. A legalistic person was penitent only through fear of punishment, not through love of Jesus.

6. Because they are “legalistic” (see note above), they cannot believe they can be justified by faith.

8. Every year the Salzburgers celebrated a memorial and thanksgiving day on the anniversary of their safe arrival in Georgia.

9. For years Boltzius assumed that Theobald Kieffer, Jr., was older than Jacob, but he finally realized his error.

12. Rottenberger’s brother was among the large group of Salzburger exiles who found refuge in East Prussia.

13. The Salzburgers sold only boards made from heartwood and retained the slabs, or outside boards, for their own use.

14. Jacob Metzger of Purysburg had sent his son to Charleston to take his two youngest children from their mother, who was begging on the streets. On their return, their boat capsized and his three children were drowned. He later moved to Ebenezer, where his children became prominent inhabitants.

1. “The Lord hath helped so far” was one interpretation of “Ebenezer.”

2. The Salzburger Matthias Zettler came as a youth with the second Salzburger transport.

3. Many of the Salzburgers had resided at Memmingen, not far from Augsburg, after their expulsion and before their migration to Ebenezer.

4. Whooping cough was the cause of many infant deaths.

5. Sola Bills were bills of exchange issued by the Trustees and negotiable only when signed.

6. This daughter is never named.

7. In the first years of the colony there was a crane on the bluff manned by German indentured servants, but it had been discontinued. The bluff was some forty feet high, very steep, and sandy, making drayage very difficult.

10. This is an example of the Pietists’ faith in theodicy. Since God is omniscient, omnipotent, and all-loving, anything He does is for our good, even if human understanding cannot comprehend the fact.

11. Although George II was the head of the Anglican Church, he was a Lutheran and maintained a Lutheran court chapel.

1. C**s was Friedrich Curtius, or Kurtz, who posed as the son of a Lutheran minister with prominent connections in Philadelphia. He organized a big-time timber operation and then absconded with the cash and left the Salzburgers with heavy debts.

6. Schauer’s Balm was a panacaea manufactured in Augsburg by Johann Caspar Schauer.

8. By Arbeiter Boltzius surely means a minister, or laborer of the Lord.

11. The Trustees had tried to prevent large land ownership by restricting grants to fifty acres tail-male. They seem to have been influenced by the social theories of James Harrington.

12. Of all the many children born during the first two years in Old Ebenezer, only three survived infancy.

1. Either Boltzius failed to give the amount the Trustees paid, or else the typesetters deleted it.

2. Johann Joachim Zübli, son of David Züblin of Purysburg, was then preaching to the Reformed Swiss and Germans in and around Savannah despite his extreme youth.

5. The District of North Georgia was governed by a council of a President and five Assistants. At the moment the president was Col. William Stephens.

6. Perhaps because the Cockneys often dropped their “h”s, the Germans thought they were doing so with the name Abercorn, which sounded to them as Hafer (oats) and Korn (corn). Now, thirteen years after first stopping off at Abercorn, Boltzius had learned its true name, that of Georgia’s benefactors, Lord and Lady Abercorn.

8. Senior Urlsperger. Samuel Urlsperger was the Senior of the Lutheran Ministry in Augsburg.

10. This was probably Johann Adam Treutlen, later the first elected governor of Georgia.

11. Thomas Stephens, the disloyal son of Col. William Stephens, had persuaded several inhabitants of Ebenezer to side with the Malcontents, the disaffected party in Savannah that wished to combat the Trustees’ plans.

12. With or without a German pastor, the Germans would have left Frederica as the regiment was decreased, since they lived entirely from it. Actually, they did not go away gradually, but mostly in one decisive emigration.

13. She uses the word Lehrer, which invariably meant ministers. Teachers were Schulmeister.

2. Now Boltzius is using the name Kurtz instead of Curtius. See April, note 1.

3. Apparently a Latin version of his Compendium mentioned in May, note 9.

4. Boltzius used the superlative even in distinguishing between two things.

6. Matthias Kurtz was actually from Dürrenberg; but, since the Protestants from there were expelled simultaneously with the Salzburgers, they were associated in the public mind.

7. The British treaties with the Indians had stipulated that the whites would occupy only the tidal lands, but this stipulation was honored mostly in the breach. Ebenezer itself was some miles above Purysburg, which was built on the highest reach of the tides.

11. The “Newlanders,” or recruiters for ships’ captains and colonial authorities, often forged optimistic and enthusiastic letters, purportedly from recent settlers in America.

12. Col. Stephens and other officials complained that the settlers who had been settled around Savannah at the Trustees’ expense would leave the farm to their wives and children and work on the fortifications for wages, thus defeating the Trustees’ purpose.

13. Christian Gottlieb Priber, who was trying to unite the Red Men against European encroachment, was kidnapped by Creek Indians and sold to Oglethorpe, who imprisoned him at Frederica, where he died.

1. One might expect to find Deists in Charleston, but hardly Arians and Socinians.

3. These children were suffering from pica or “clay-eating,” the result of a dietary deficiency. Eating inedible food was the result, not cause, of the ailment.

4. Boltzius, using the Roman numbering, numbers these two commandments as the fourth and fifth, but this translation uses the Greek system found in English literature. Children who succumbed to their desire to eat dirt were violating the fifth by disobeying their parents and their ministers. They were also violating the sixth commandment by killing themselves.

5. The Francke Foundation of Halle was sending missionaries to India under the auspicies of the Danish crown.

6. As the German word Baumwolle (tree-wool) suggests, cotton grew on trees as well as on bushes.

7. Only forty-six years later Eli Whitney solved this problem only a few miles from Ebenezer.

1. Boltzius must be in error here, for there are no records of a Peter Grung. There was an Abraham Grünig or Grüning, who arrived with the Moravians on the Simonds, Captain Cornish, on 17 Feb. 36 along with the third Salzburger transport. He dwelled for a while at Old Ebenezer and then went into military service at Frederica, before being promoted to lieutenant on the campaign against Cartegena.

2. Weissiger had returned with the second Salzburger transport after collecting money in Germany for churches in Pennsylvania.

3. In 1740 the British attempted, but failed, to take Cartagena, a fortified city in Columbia.

7. Boltzius says leihet (lends) instead of ehret (honors). This would appear to have been a typographical error except that a few lines further on he speaks of “lending to the Lord.” The word leihen, which now means “to lend,” still had its medieval meaning of to grant or to enfief.

8. The Protestant Body was a kind of caucus to protect the interests of the Protestant minority at the new permanent diet at Regensburg.

1. Boltzius and Gronau had been ordained in Wernigerode, an East German city, on their way to Rotterdam to join the Salzburgers.

2. The Red Bluff, on which Ebenezer was built, was discovered by people from Old Ebenezer searching for acorns for their swine.

2. War of the Austrian Succession.

1. The Society for Promoting Christian Knowledge, the missionary society in London that paid the wages of the ministers and schoolmaster at Ebenezer and helped in many other ways.

2. The skillful surveyor and engineer Joseph Avery rebuilt the mills and then returned to Savannah to recuperate, but he died there.

3. The widow Christ, first name not given, had married the convert Gottfried Christ. Her father was Jacob Metzger of Purysburg.

5. Modern notation provided by The Rev. Raymond E. Davis, Jr. who had the transcription made (in the same key) by Dr. Robert L. Harris, Assistant Professor of Music, Fine Arts Department, Armstrong State College (a division of the University of Georgia), Savannah, Georgia. The original notation was as follows: 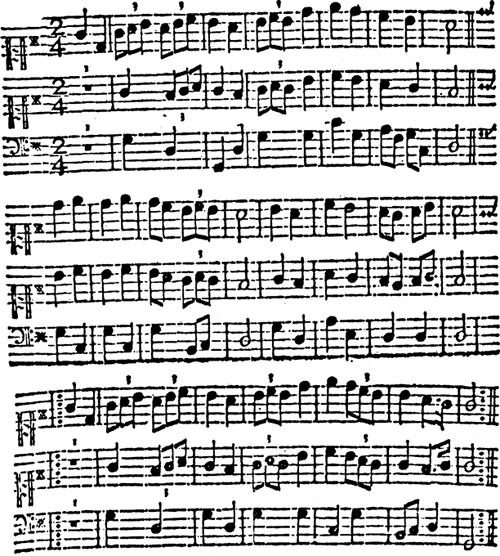