Birchmore's main mode of transport was his bicycle. But, when he had to, he resorted to other means.

Click on each image below for a higher-resolution version.

Terrain, flat tires, weather, or other circumstances sometimes forced him to walk, while pushing his bike. 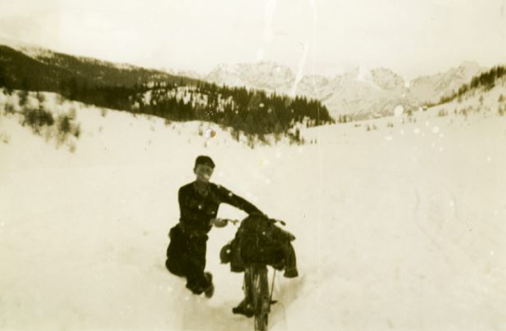 Fred Birchmore wading through drifted snow in the Alps

A train ride, in a sense, marked the very beginning of Birchmore's journey. He rode by rail from his Georgia home to New York City, where he would board the ship that took him aross the Atlantic. 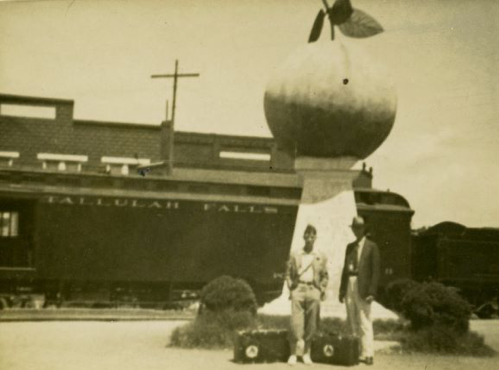 Fred Birchmore (l) and his father (r) at the train station in Cornelia, Georgia

Birchmore also had a memorable, and pivotal, train experience in Egypt. Here, he recalls his trip from Suez to Cairo, Egypt—after his money and passport had been stolen while he slept on the beach by the Red Sea.

"I had intended crossing the desert back to Cairo on the fast Diesel-engined train, but I was misdirected into a stuffy old third-class pioneer train, which was going almost to Port Said before circling back to Cairo. It was my first and last experience on a local Arab train. My third-class car was packed like sardines. . . . The already overcrowded train gradually increased its human cargo at each station along the road. I could hear the throb of the engine: 'Cairo or bust—Cairo or bust—Cairo or bust.'"

"However, I was soon to look back gratefully upon the human cargo on my train for giving me an insight into human nature that would enable me to go alone, yet in safety, through the wildest tribal regions on the globe. Only because of my own destitute position, was I enabled to learn what great reservoirs of kindness lay hidden in the hearts of even the poorest and hardest-featured—hard faces, because life had not used them well—of my companions. When word was passed around that I was not really one of those brain-cracked millionaires, 'roughing it' for the novelty, but was actually broke, like the rest of them, I was immediately showered with sincere sympathies and offers of material gifts from all."

"Poor little fruit vendors urged me to accept gifts of oranges, bananas and nuts. Even the timid, hooded Moslem women crept up and insisted that I accept a loan of their meager one-or-two piastre fortune. Everyone—especially the poorest and most wretched looking—was eager to share his only possessions."

When not on his bike, the longest distances Birchmore covered were by ship: some 15,000 miles in all. Some of his routes are not known, but can be reconstructed with a reasonable degree of accuracy. 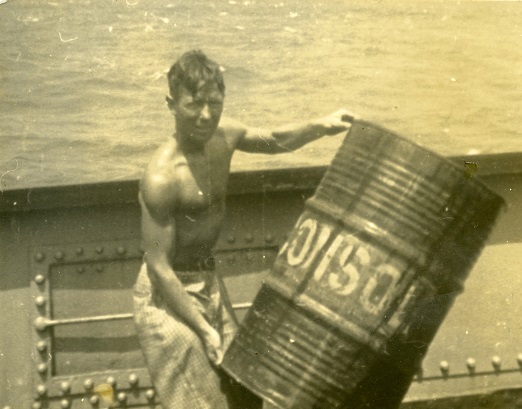 To get from Damascus, Syria to Baghdad, Iraq, Birchmore rode a bus as part of a motorized caravan across the desert. The best ride in this caravan could be had on the Nairn Transport bus, which was something of a luxury liner on wheels. Birchmore was prepared to purchase a Nairn ticket when another bus driver, mistaking him for a European refugee, offered him a free ride on his somewhat-less-splendid bus. Birchmore accepted the offer but left the caravan altogether halfway to Baghdad. After numerous stops for daily prayers and stuck vehicles, Birchmore had grown frustrated at his slow progress. He unloaded his bike and stole off into the desert, determined to go it alone. 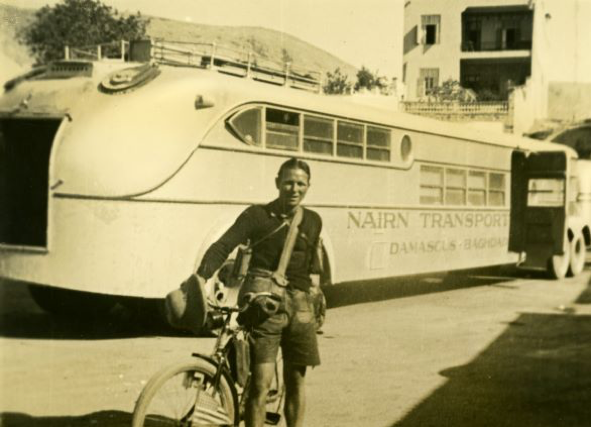 Fred Birchmore joining a motorized caravan from Damascus to Baghdad

Finally, at the end of his journey, Birchmore rode by car from California back to his home in Georgia. His family, worried that they might not see him before he took off on another lengthy bicycle trek, met Birchmore at the docks when his ship arrived in San Pedro! Just a few years later, Birchmore would indeed cross the American continent by bike, this time from east to west.