In addition to the photos he took and the mementos he acquired, Birchmore also accumulated papers of all kinds along his journey—a sizeable quantity of which have survived both in his family and in public repositories.

The two links to the left will take you to slideshows of all images in this section, including more passport pages.

Birchmore's passport offers a trove of information that helps place him in various locales, at specific times. Unfortunately, his original passport, which documented Birchmore's travels through the first half of the countries on his journey, was stolen in Egypt.

"That night I slept too soundly on the beach. The Red Sea put me in the 'red' financially, and I really found that 'there ain't no ten commandments there.' At the American Express Company in Cairo it had been necessary to convert into cash $300.00 of the $600.00 I had with me in travelers' checks, as the Palestine border officials required such deposit from all residents of Germany. On this, the only night when I ever risked more than a few cash dollars on my person, I waked in the cold hours of darkness just before dawn. In reaching for an extra shirt in the knapsack under my head, I discovered that the knapsack had been neatly slit open from end to end. Tooth brush, diary, and maps lay scattered on the beach around my head and extra shirt and shorts were still intact, but my money-belt containing the $300.00 cash, travelers' checks, passport, and all other important documents had vanished!"

Shown here are some pages from the replacement passport he obtained at the American Consulate in Cairo. The variety of stamps, in an array of languages, seem custom-made to incite restlessness in would-be travelers. Add to that a good number of different handwriting styles—and the fact that some stamps overlap each other—and one has a fascinating (but challenging-to-research) document.

Birchmore had the foresight to save other less important pieces of paper from his trip—all of which prove invaluable in tracking him.

Documents: a letter of introduction (l) from one of Birchmore's new acquaintances in Iran to a future acquaintance in India, and a receipt (r) for a duty Birchmore paid for transporting his bike into Palestine from Egypt.

Documents: Birchmore's student ID (l) from the University of Cologne, and an admission ticket (r) into the Grand Palace of the King in Bangkok.

The two largest public collections of documents related to Birchmore's journey are in the Hargrett Library of the University of Georgia Special Collections Libraries, and at the Research Center of the Georgia Historical Society in Savannah. Birchmore's papers at the University of Georgia include oversized scrapbooks filled with papers he collected on his journey. They are a treasure-trove of clues about what he did and where he went. The Georgia Historical Society has some photos not found elsewhere, and postcards sent along Birchmore's route. 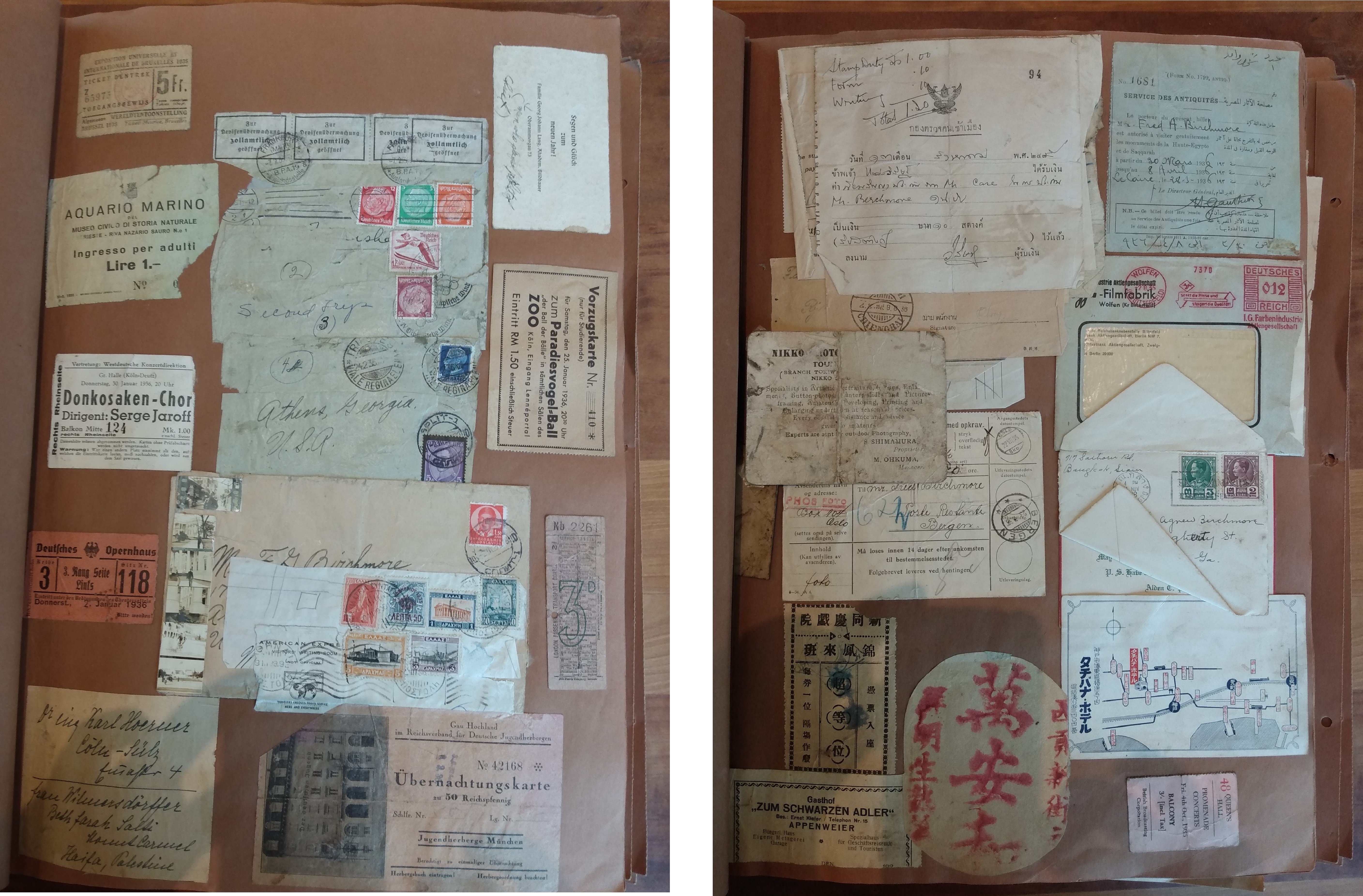 (l) to (r): Pages from Birchmore's scrapbooks at the University of Georgia Special Collections Libraries.