Summer solstice: longest day of the year, first day of summer. We were going over to visit our friends on the other side of the river where there would be live music and lots of beer. That day was the quintessential beautiful day, with blue skies, puffy white clouds, and a warm breeze (I call a day like this a Colorado day, in complete unfairness to the few times that Maryland gets it right). It was a stark contrast to the day before, when the “bottom dropped out” and the sky deluged us with water. The rain meant that our friends’ long driveway would be filled with muddy potholes; not that there is anything wrong with long driveways full of holes— I live down one myself. I’m telling you this because it figured into our decision about what mode of transportation to take to the party … and eventually into this discussion of trees.

If I were to go to my friends’ house by car, I would drive down to the end of my long, bumpy driveway, make a left onto a country road, drive five miles to where the road ends at the river, and wait for a ferry. The ferry is the oldest continuously operating free ferry in the United States. It can hold three cars, but usually there aren’t three cars waiting for it. I sit in my car while the ferry chugs to my side of the river so I can drive on. The ride takes about seven minutes, and most people stay in their cars. I always make it a point, though, to get out and enjoy the river; it’s a commitment I made to myself when I began working on my master’s degree at a university across the river. I decided that ferry time would be sacred time— I would breathe, enjoy, meditate, see; I would never study on the ferry. 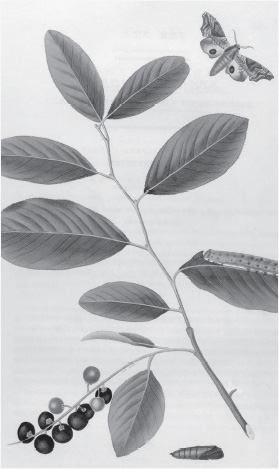 Once I reach the other side of the river it is less than a mile to my friends’ long, muddy driveway. It’s quite a nice trip, actually—the problem is that the ferry closes at dusk. If we should stay until after the ferry closed we would have to make a mood-sapping forty-three-mile drive through the city to get home. Taking all of that—and the beer—into consideration, we decided to arrive at the party by boat. Our boat, by the way, is just a little over ten feet long. I named her Marshmallow because that is both what she looks like and how she handles. In a nod to history it is also the plant I studied for my master’s degree.

We had a beautiful journey downriver, and the poetry of Li Po was in my thoughts:

Since water still flows, though we cut it with our swords
And sorrow returns, though we drown it with wine,
Since the world can in no way answer our craving,
I will loosen my hair tomorrow and take to a fishing-boat.1

Perhaps it was on a day just like this one that he penned that verse.

The past week had been difficult, but now it was time to loosen my hair, drink some beer, play some horseshoes. At the party there were new people to meet and the usual assortment of dogs and children. Just before sunset the wind died down and the glass-smooth water reflected the silvers, pinks, and blues of the sky. I wanted to be back out on the water—it was time to head home.

Our river is always beautiful, but sometimes— frequently—it is breathtaking. This was one of those times: the brilliant colors of the sky and the water swirled together, osprey circled overhead, and the varied shapes of the beautiful trees on the shore reflected onto the liquid canvas. The sun’s last light hit the eastern side of the river, illuminating a row of big, old eastern redcedar trees (Juniperus virginiana). First one: green; second one: green; third one: green; fourth one: blue. At precisely that moment it became summer for me: the female cedar trees were forming their blue berries.

Redcedar trees are among the species that have gender. They are either male or female, and only the females produce berries. So the first three trees I passed—the green ones—were males, and the fourth was a female. Her berries had actually started forming in the very early spring, after the wind blew pollen from the male trees into the tiny openings of her small cones. Once pollinated, the openings closed and the berries started to enlarge. At first they were green, then they became greenish white, then whitish blue, and then, finally, sky blue. And then it was undeniably summer.

Although I love the contrast between the green foliage and the blue berries, that palette didn’t evolve for my delight; it’s for the birds, as the expression goes. The blue color is a signal that the fruits are ready to eat. Why would a tree want a bird to eat its berries? Sometimes that’s the best strategy for propagating the species. Elms, tulip poplars, maples, and many pines have small, windblown seeds, but the heavy redcedar berries drop straight to the ground under the parent tree. The seeds can’t germinate in the dense shade under the evergreen mother tree, so birds are necessary to carry the seeds around, and they are rewarded for their labors with a bit of food. The fleshy part of the berry is digested by the bird, but the hard seeds pass through the bird’s digestive system unharmed and, hopefully, land some distance from the mother tree in a spot suitable for germination.

REDCEDAR TREES can be found throughout the eastern United States. They are among the first trees to become established on abandoned fields and areas cleared for pasture. We have the birds to thank for that. No birds: no new cedar trees. In my sophomore year in college, my geography teacher noted that old cemeteries always seem to have redcedars; he wondered if there could be some old custom of planting them there. That is possible, I suppose, but the most likely scenario is that birds resting on headstones relieved themselves of the seeds in their guts. Birds, not humans, are probably responsible for those trees.

A SCIENTIST named Mark McDonnell did an experiment in which he put posts of varying heights into an old field and then determined where birds perched and “dropped” (a polite euphemism) seeds in the field.2 He found that no seeds were dropped in the open, and none were dropped under the short half-meter posts. The birds preferred to sit on the three-meter-tall posts, and all the seeds were dropped there.

MY ELEVEN-MILE DRIVE into town— a right turn out of the driveway, the opposite direction from the ferry— is on a road that once went through corn and soybean fields. One by one the fields are being converted into housing developments. The conversion is very easy for the developers: no site preparation is needed; just add a foundation and a driveway, and almost overnight the little houses— I call them chicken pox— appear. The difficult part belongs to the homeowner trying to make a lawn and garden from a bare old cornfield. On my drives back and forth I watch the new homeowners seed lawns and water them, plant flowers and water them, plant trees and water them, weed and mow. Do they know that here in the East we can have trees for free? All we have to do is: nothing. Stop mowing. Forest is our land’s natural calling, and if you leave just about any spot here alone for long enough it will become a forest, thanks to the birds and the wind. If you want to speed things along you can put in some three-meter posts for the birds to rest on. I guarantee that within five years you will have redcedars, wild cherry trees, and, if you’re lucky, maybe persimmons too. You don’t have to buy trees to have a wooded yard; time is all it takes.

IT IS NOT UNUSUAL to see individual cedar trees in yards or graveyards or along the river; but it is unusual to see a grove of cedars. Here on the farm I have the prettiest eastern redcedar grove I know of; it’s in a seven-acre pasture that is turning back into forest. After seeing so much forest around me dying (or being converted, as the foresters say), I need the joy of knowing that in my yard, at least, the forest is winning. I have dedicated the pasture to the wild animals and the trees. They need to have a few places left just for them. Mostly I leave them alone, but on rare nights I hike out there and join the community. On a dark night it is even darker under the cedar trees; you can smell the recent presence of animals, and you can feel that you’re in a landscape that humans don’t dominate. It’s not wilderness, exactly, but it’s going in that direction. I like to think of it as swimming upstream, or, as writer Rick Bass would put it, “casting left while the world is casting right.”3

In today’s world we have carbon dioxide coming out of our tailpipes and our smokestacks— the global carbon dioxide level is rising alarmingly as a result— but here, in this spot, more carbon dioxide is being removed from the air than is going into it. Here the trees are inhaling the carbon and holding it in their cells, in their wood. It’s another reason not to mow the lawn, or at least not all of the lawn.

THE LIST OF BIRDS that eat redcedar berries is impressive: cedar waxwings, bobwhites, quail, wild turkeys, downy woodpeckers, starlings, robins, yellow-rumped warblers, pheasants, and ruffed grouse. I have seen all but the last two species here. Are the trees here because of the birds? Or are the birds here because of the trees? The answer is yes to both.

Cedar trees are more than just a food source for birds. Many birds build nests in cedar trees, and the trees are also very important roosting sites, places where birds can just sit and watch the world go by or sleep or hunt. Redcedar trees make good roosts because their dense, evergreen foliage blocks the wind and keeps the birds warmer in winter. Cedar trees are important roost sites for mourning doves, ruffed grouse, and owls. Want owls? Let the birds plant cedars.

Many mammals eat redcedar berries too: rabbits, foxes, raccoons, skunks, opossums, and coyotes. Again, I have seen all but the last species here, and my neighbor claims that he saw a coyote on his farm this year. I believe him. Maryland’s Eastern Shore is one of the last places in the country without coyotes, and it was just a matter of time until they showed up here too.

I haven’t developed a taste for those berries myself, but then again, I’m not a gin drinker either.