As I took a solo walk through the forest, I practiced identifying the trees around me without looking up. I came upon one section of the trail that was covered with spiny “monkey balls”; that’s what we called them when I was a young girl running around in bare feet trying to avoid the prickly things. If you live in the Southeast, you know what I’m talking about: the round, inch-and-a-half-wide, spiny, brown seed balls of the sweet gum tree (Liquidambar styraciflua). I know people who have cut down the sweet gum trees in their yard because they didn’t want to be bothered by the pesky balls. Perhaps they were following advice from the Horticulture Solution Series published on the Internet by the University of Illinois, which advises gardeners that “the only way to prevent sweet gum balls from forming is a chain saw used at ground level.”1 Like most things in this world, the gum balls are a matter of attitude. If you wear shoes and think of the spiny brown balls as important recyclers of forest nutrients, you may learn to love—well, at least tolerate— them.

Sweet gum trees have many positive attributes. They are among the first trees to return after a forest is cleared. They are usually not a large component of a mature forest because they are less shade tolerant than other trees. For a long time naturalists believed that the young sweet gum trees that came up in cleared land grew from dormant seeds that had lain on the floor of the former forest. Recent studies, however, have shown that most of the young trees are not seedlings at all but instead are sprouts from roots of the trees that were cut. Up to forty young trees can sprout from a single large root.

Sweet gums grow tall and straight with a very compact pyramidal crown. Even those left to grow naturally look very well tended. The leaves have a pleasing, regular star shape. If you pay close attention to such things you will notice that the first leaves to emerge in the spring, the ones that have been packed tightly into buds all winter, are “fat stars,” and the leaves that form later are “skinny stars.” No one really knows why sweet gums have evolved this pattern of growth. Some botanists speculate that because the later leaves will be on the ends of the branches, and therefore most exposed to environmental conditions, they need to be more drought tolerant. A later-growing “skinny star” will have the majority of its cells closer to a main, water-supplying vein than a fat star will; and therefore, the hypothesis goes, will not be as likely to dry out in a summer drought. Scientists love to speculate, and this particular hypothesis, like many others, has never been tested.

The leaves of the sweet gum tree are food for an organism you will see only if you are very lucky. The luna moth (Actias luna) comes out only at night. The largest moth in the Southeast, it is a gorgeous pale celadon green with long tails on its hindwings. Picture Tinkerbell or some other garden diva fairy fluttering around the flowers on a moonlit night, and you will be close to imagining the wonder of sighting a luna moth. Some people have suggested that the luna moth is the source of the fairy myths. 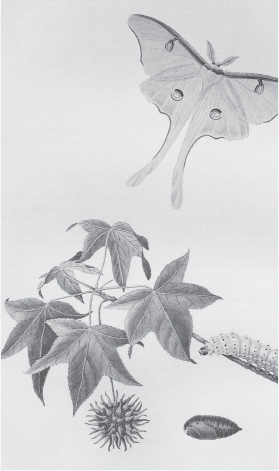 At about 10:00 p.m. on the very evening the female luna moth emerges from her cocoon, she extends her abdomen and releases a chemical that attracts male luna moths. “Urge and urge and urge / Always the procreant urge of the world,” wrote Walt Whitman.2 The beautiful pair mates for a few hours, and then, at around 1:00 a.m., the female moth flies off to lay her eggs. In the northern states females lay their eggs on the leaves of the paper birch tree (Betula papyrifera), but in the Southeast they usually lay them on the leaves of a hickory or a sweet gum. The female lays a few dark, oval eggs on each leaf that she visits. The adult moths live only seven to ten days, and they don’t feed at all.

A few days after they are laid, the moth eggs hatch into ravenous green caterpillars that get fatter and fatter as they munch on the tree leaves. They look a bit like the caterpillars that feed on tomato plants, except that the luna moth caterpillar has a pale yellow stripe running the length of its body and lacks a “horn” on its rear end. Because the adult moth doesn’t feed, it depends on the caterpillar— its previous incarnation— to store enough energy to fuel its activities as a moth.

NEXT TO THE MAPLES, with their unmatchable fluorescent oranges, sweet gums have the most beautiful fall colors. It is not unusual to find dark purple, red, yellow, and green all on the same leaf. If you have a sweet gum tree in your yard and you are considering cutting it down—those pesky seed balls— I suggest you wait until fall and reconsider.

SWEET GUM TREES don’t begin to flower until they are at least twenty years old. Each tree produces two types of flowers that bloom at the same time. The flowers aren’t very showy, though, and you probably won’t notice them unless you look very carefully in the spring. The pollen-producing male flowers are in long, hanging bunches, and the nearby female flowers are arranged in a round head. After the female flowers are fertilized their ovaries begin to swell together and form the prickly seed ball. At first the seed ball is green, but after the seeds inside it mature, the ball turns yellow. The prickles on the seed ball then split open— resembling an open bird’s beak—and the mature seeds, with their small wings, flutter out. Other, also winged, organisms eat them. The little Carolina wren, of the clear, proud “teakettle” call and flicking, upright tail, eats sweet gum seeds. As does the tiny Carolina chickadee with the black cap. The empty seed balls eventually turn brown. Some remain on the tree all winter, finally dropping to the forest floor in the spring. There they become food for the organisms that decompose the organic material on the forest floor—and, eventually, for the mother tree or some other plant.

MOST PEOPLE look around them and think that the plants on the earth have always looked pretty much like they do now. They know that the animal species have changed—we used to have dinosaurs— but many are not aware that the flora of the planet has changed as well. We are accustomed to the flowering plants, such as the trees I have been describing, as being the most abundant; but the flowering plants are the most recently evolved plants. During the era of the dinosaurs the forests looked very different; there were many more tree ferns and cycads than flowering plants. Humans and flowering plants are some of the more recent additions to the earth.

Every species on the planet has its own fascinating history: where it evolved, where it spread to from that place, and where it is located now. Some plant species are already gone, extinct; some, like the blue-flowering Phlox I saw in Idaho, exist only on a few acres; and others, like the black locust, have spread across the globe. Teasing apart the history of a plant species, using hints from pollen records and plant fossils, is a very time-consuming task; the histories of most have not yet been worked out.

We know that sweet gum trees used to occur over a much broader area then they inhabit today. There used to be one species of sweet gum that was circumpolar—that is, found all around the planet. Then, for reasons not completely known but probably related to climate changes, its range started shrinking. At least three populations became separated from each other, and through different agents of natural selection in the various locations, or perhaps through random genetic drift, the single species diverged into three different species with smaller ranges. Today there is a species of sweet gum that occurs in China, another that occurs in Turkey, and a third that occurs in North America. The North American species grows primarily from Connecticut south and west to Texas; in the cloud forests of central Mexico, however, there are occasional stands of the same species, remnants left from a time when the range was larger.

CARL LINNAEUS developed the system of naming plants using Latin binomials. In 1753 he named the North American sweet gum Liquidambar styraciflua. The melodious genus name refers to the fragrant, resinous sap produced by the tree. (The gem we call amber is fossilized tree sap.) The Aztecs used the aromatic sap of sweet gum trees as medicine, in smoking mixtures, and as incense. Researchers Amy and Townsend Peterson described the tribute Aztec leaders demanded from groups they conquered.3 The demands ranged from gems to food products; but from conquered groups near the sweet gum forests the Aztec leaders demanded the fragrant resin. Today we no longer use the resin, nor even know how it was extracted. We have lost touch with one of the pleasures that the sweet gum tree can give.