I have been intimate with sycamore trees: my nose an inch from the bark, my arms wrapped around the trunk, my skinny schoolgirl legs stretching for the next branch. I am a climber of sycamore trees (Platanus occidentalis). The trees and I grew up together in the same suburban neighborhood. Standing atop a chain-link fence surrounding one of the half-acre lots was a good way to reach the first branch. After that it was all flexibility and daring until I dared to go no further and found a spot to rest … and look down.

As I get older I rehearse the concept of my own mortality more frequently, but being far up in that tree was my first opportunity to practice.

“I could die at any moment.”

“One wrong move and I could die right now.”

In many ways it was a thrilling and freeing thought. I don’t know if the attitude, the altitude, or the solitude had the greatest effect on me in that tree, but up there I had a completely different perspective on the rest of the world. There I could be myself, a distinct individual not shaped by parents or teachers or friends, but shaped instead by some mysterious universal force to fulfill some unknown void in the web. High up in that sycamore tree I had my first taste of self-actualization. It makes me wonder if my life would have turned out differently had I no big trees to climb.

Years later, I was interested to read that another climber of sycamore trees is mentioned in the Bible. Luke 19 tells the story of Zaccheus, who climbed a sycamore tree because he was trying to “see who Jesus was.” It was the only way he could see over the throngs of people who had gathered to see Jesus as he passed through Jericho. When Jesus passed under the tree he looked up and saw Zaccheus there.

“Hurry and come down,” Jesus said, “for today I must stay at your house.”

Although the species of sycamore in America is not the same one that grew in Jericho, I still like the story—I like the idea that Jesus had a fondness for tree climbers.

AS A SYCAMORE TREE GROWS, the outer layer of bark cannot keep up and eventually peels off in flakes. This is happening in my yard as I write, in the midst of the dog days of summer. Underneath the peeling flakes the branches are smooth and white. The result is a pattern of tan, olive, and white patches, making the tree look as if its skin were peeling from its bones. During the summer months the leaves hide the nakedness of the white bark; but after the leaves have fallen, in the bright light of a winter afternoon, the sycamore tree resembles a huge skeleton standing guard over the landscape.

SYCAMORE TREES are the most massive trees in the eastern United States. They can grow over a hundred feet tall and as much as ten feet wide. They can live for up to five hundred years. When they get very old, sycamores tend to form a cavity at the ground level. These cavities eventually get large enough for a child to enter and play “fort.” Perhaps you remember playing in such a tree yourself?

Rural legends claim that the early settlers used these huge old hollowed-out trees as shelters for their livestock, keeping them out of the weather and protected from predators—a sort of poor man’s barn. Besides being places for children’s play and farm animals, sycamore trees have also been called home by grown men and women. The most famous of the sycamore homes was the one occupied by brothers Sam and John Pringle. The young, destitute brothers enlisted in the British army in the late 1750s, primarily to get free passage to America, and were stationed at a fort in what is now West Virginia. Eventually Sam and John decided to desert and headed off into the wilds to avoid capture. In the forest they met a solitary trapper. The brothers spent a few years with him, trapping and living off the bounty of the land. They had no money, but they managed to stay alive and free. Eventually the Pringle brothers had an argument with the trapper and went out on their own. It was then that they found the hollow sycamore tree that gave them protection: from the weather, the local Indians, and the British soldiers who were searching for them. They lived in the tree for three years.

When they learned that the war was over and they no longer had to fear capture, the brothers traveled back to civilization with stories of the wonderful fertile valley where they had been living in a tree. They convinced a small band of pioneers to establish a settlement with them in the valley. During that time Sam met and married young Charity Cutright, who lived with him inside the tree after John graciously moved out.1 I wish I could speak with Charity and learn what she thought of living inside a sycamore tree! Perhaps someday I will spend the night in one myself. 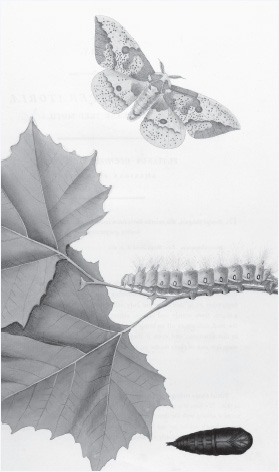 HUMANS AND LIVESTOCK are not the only creatures who consider sycamore trees a suitable dwelling place. In 1993 a group of biologists discovered a colony of rare bats living inside a hollow sycamore. While mist-netting bats they captured a rare Indiana bat (Myotis sodalis). They attached a radio transmitter to the bat and released it. When they searched for it the next day using a radio receiver, they discovered that the bat was roosting in a sycamore tree about a mile and a half from where they had captured it. The roost was a maternity colony, containing lactating females and their young. The researchers could count the bats and determine how many were using the tree by stationing themselves outside the tree at sunset when the bats headed out to feed. It turned out that there were almost a hundred bats living in that sycamore tree.2

THE INTERIOR OF THE TRUNK isn’t the only place where creatures live. If you look closely at a sycamore leaf you will notice that it is not evenly green. There are pale yellowish areas on the leaf where the green seems to have been scraped off. These lighter areas are caused by insects feeding on the cells on the underside of the leaf. The insects scrape or suck everything out of the cell, including the green-pigmented chloroplasts, creating the pale mottling you see on the upper side of the leaf.

Sycamore trees have many insect partners that are found on no other plants. One of the most beautiful of these is the tiny sycamore lace bug (Corythuca ciliata). Imagine armor made of hardened lace with clear panels between the lace strands, and you get an idea of the fascinating appearance of these little bugs. They are visible to the naked eye, but a magnifying glass is necessary to really appreciate their beauty. Chances are you will find them on most of the sycamore leaves you examine. No sycamore trees: no sycamore lace bugs.

The sycamore leafhopper (genus Erythroneura) is another insect that feeds only on sycamore leaves. There are six species of these leafhoppers, and the only way to tell them apart is to examine the male’s genitalia under a powerful microscope. The females can’t be told apart at all. As a scientist I understand the impulse toward minutiae that so often confounds others, but even I have a hard time imagining who took the time to examine the genitalia of insects no bigger than a grain of rice.

Mark McClure, a researcher in Illinois, spent a year studying five species of tiny insects he found on the underside of sycamore leaves.3 He learned that the different species feed on different parts of the leaves. For instance, some species were never found feeding on the veins, and others were almost always found feeding on the veins. The insects were doing what biologists call “partitioning the resource”— sharing. Of the five species that McClure studied, only one, the potato leafhopper (Empoasca fabae), did not feed and breed exclusively on sycamore. The other four insect species ate, copulated, and laid eggs on the sycamore leaves. When the leaves dropped from the trees in the fall, the insects rode them down to the ground and found a place in the leaf litter to survive the winter. These little insects lived through snow and ice and in the spring flew back up to the newly emerging sycamore leaves.

The potato leafhopper (the nonexclusive insect), however, cannot survive freezing temperatures. When fall arrives it must migrate to the south. You have doubtless heard of the migration of monarch butterflies, whose long journey seems miraculous enough, but we are talking here about an insect that looks like a green sesame seed with wings— a thing so small that it cannot fly against the wind. The leaf-hopper depends on the wind patterns to carry it to warmer temperatures where it can survive; and so this tiny thing joins the ranks of the aeroplankton: living things in the air.

How do the leafhoppers know how to catch the winds headed south in the fall and north in the spring? Scientists who have studied that question believe that just the right combination of light wavelength, pressure change, and temperature induces the leafhoppers to begin flying.4 Once in flight they are carried into the air mass that rides high over a front and are, if luck is with them, taken in the direction they need to go.5 The tiny insects can travel six hundred miles this way— an amazing feat. I certainly hope they don’t end up on my windshield.

I KNOW of nine insect species that depend entirely on sycamore trees, and there may be more. So if we remove all the sycamore trees we will not only disrupt the development of young human girls and boys, but nine other species may be lost as well. When I explained this to a visiting friend he said, “So it’s not like the trees are in the environment; it’s like the trees are the environment.” Yes, my friend, you get it.