SOME THINGS HAVE STAYED with me through all of this and happen in my memory as if they are still occurring—like a story I am rewriting until I get the ending right. I know too that it’s a form of rebuilding.

The day of my brother’s sentencing, July 14, 2008, is typical for south Mississippi—almost unbearably hot, the air thick with humidity. On the way to the courthouse, I notice a group of convicts in green- and white-striped pants working along the road—picking up trash, mowing the tall grass. Others are helping to spread tar over a patch of Highway 49, and the acrid smell comes through the car’s air vents before we can close them. I read the letters on the prisoners’ backs, MDOC—Mississippi Department of Corrections—and the words INMATE WORKER, an image of the contemporary chain gang.

Brett and I arrive at the courthouse, both of us in suits, just before 9:00 a.m. At the security checkpoint I empty my bag and watch the guard sift through the contents, embarrassed that I had not jettisoned more before coming. Aesha meets us on the other side, and we walk into the courtroom together and find seats a few rows back from the short barrier that divides the area where the attorneys sit from the rest of us. In a whisper she tells us that Joe’s attorney can’t be there this morning, that he’s had some family emergency. Neither of us thinks this bodes well for the outcome, but we say nothing—afraid to put our worry into words.

When the judge enters—the Honorable Lisa Dodson—we watch her face and gestures for signs of her mood. After months of coming to these hearings, we know to try to surmise from her rulings on the cases of other defendants how she might respond when Joe stands before her. On several occasions, Joe’s lawyer has asked for a postponement when he’s thought she wasn’t in her most charitable mood. He also made sure this is the judge who hears my brother’s case—she’s known for being thoughtful, empathetic. She knows Aesha too—from the days when Aesha worked as a clerk in the courtroom.

This morning, like many others, the cases she rules on have some link to Hurricane Katrina or the aftermath. A man accused of molesting the teenage daughter of a friend is pleading his case and answering her questions. Already a convicted sex offender, he is also being sentenced for not notifying the local authorities of his relocation to the area. He had come here from Florida with his backhoe to help clean up the friend’s property and rebuild the house on it. When the judge asks why he didn’t register as a sex offender when he moved here, he tells her the move was only temporary, that he was only “here because of the storm.” Then he adds, “Anyway, I figure you people always know where I am.” There’s a spill of laughter in the room before we regain our composure, hoping we haven’t angered the judge into handing down harsher sentences for our loved ones. She seems sympathetic when the friend stands up to give testimony on behalf of the accused. He asks for leniency because the man had been his friend, had helped him out after the hurricane. The daughter isn’t in the courtroom, and I wonder what she would think about her father’s request.

I am trembling by the time Joe stands before her, and the sentencing seems to take forever. Except for the funeral, this is the first time I’ve seem him since the hearing in which she ordered him into custody, nearly three weeks ago, and he is wearing the orange uniform given to inmates in the county jail instead of his street clothes. Somehow, he looks smaller in it, and the way the shirt hangs on his shoulders makes him appear hunched over and anxious despite his outward calm. Leaning forward, I strain to hear his words—but he is soft spoken, and his back is to us. I can’t see his face when she delivers the sentence: fifteen years, six suspended. This is not what we’d hoped to hear, and all of us are doing the math in our heads: with nine years left to serve, he’ll have to spend at least three years in prison. That’s the least amount of time he’d have to do before being eligible for parole. In a letter to the judge, Brett and I had pledged to be part of his recovery effort, to help him get the rental units rebuilt and pay the delinquent taxes and assessments the city imposed for demolishing the blighted structures that remained after the storm. Hearing the sentence, we know a while will pass before Joe can begin rebuilding his life. On the coast, recovery takes a long time.

The deputies move swiftly once a sentence is recorded, and they immediately flank Joe to lead him out of the courtroom. I am biting the inside of my cheek to keep from tearing up so that he won’t see me cry. But then, he never turns to look back—he goes through the same door he came out of, raising his hand for us only when he’s nearly out of sight.

Stunned, the three of us leave the courtroom then, standing up as they call for the next defendant, and we don’t stop until we pass security and reach the back door to the parking lot. Outside I stand in the sun wiping my eyes as Aesha and Brett hug each other and say goodbye. Then I hug her too, and Brett and I watch her get into her car so that we can stand there waving before heading to the airport. I wait until she is gone before I turn to Brett and ask—as I had when I first learned my brother was facing jail time—how am I going to live when my heart is in prison?

I recall that before we left that morning, Brett and I stood for a while next to the rental car with the doors open, waiting for the heat inside to dissipate. I was still wiping my face when a car pulled up beside us and a teenaged boy in the passenger side leaned out the window, asking for directions. “Can you help us?” he said. “We need to find the public library.” He was riding with a woman who must have been his mother, and when she smiled at us, I could see that she was missing several of her front teeth. I remember too that the car had a Florida license plate—Escambia County—and that it was weighed down, the bumper nearly dragging the pavement. The back seat was loaded with what seemed to be all their possessions: I could see garbage bags spilling clothes, a couple of pillows and a comforter, the legs of an upended chair. With the windows rolled down, they were still sweating in the late morning heat, and I could imagine many reasons, beyond books, that they might need to reach the library: Internet access, an air-conditioned respite, a public restroom in a clean, comfortable building.

Turning to answer them, I felt an initial sense of relief that comes from being able to help—being able to answer a question or provide needed information to a stranger. The simplest of human interactions, like a greeting, it can change the course of a day. Nodding, I turned in the direction of the beach to point them toward it, raising my hand before I caught myself. The downtown branch of the Gulfport public library was only a few blocks away, and for a moment I stood there, my hand in the air—a gesture like the beginning of a benediction—before I could think of what to say. All the clichés come to me now: a stone’s throw away, as the crow flies, and—finally—you can’t get there from here; the library had been destroyed by Hurricane Katrina. Even now, as I write, it hasn’t been rebuilt.

I recall little else of that day—not the drive to the airport or our short flight back to Atlanta, nor what we did the rest of the evening. Mostly I see the way my brother raised his hand, leaving the courtroom, his back to us—a slight movement, not unlike the fulfillment of my own stalled gesture—as if he were pointing to a destination, some place not far up the road. 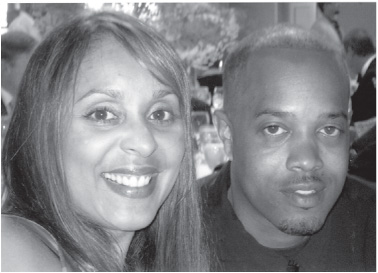