Believe the report of the Lord;
Face the things that confront you.

Here is North Gulfport—
its liquor stores and car washes,
trailers and shotgun shacks
propped at the road’s edge;
its brick houses hunkered
against the weather, anchored
to neat, clipped yards;
its streets named for states
and presidents—each corner
a crossroads of memory,
marked with a white obelisk;
its phalanx of church houses—
a congregation of bunkers
and masonry brick, chorus
of marquees: God is not
the author of fear; Without faith
we is victims; Sooner or later
everybody comes by here.

This week they are painting
the North Gulfport water tower.

Every day it grows whiter
until it is the color of clouds,

and the clouds in the heavy sky
seem whiter still. To paint the tower

the workmen have erected
a scaffolding around the tank,

a radius of poles from which to hang
the ropes that pull them up.

From a distance, the scaffolding
is a diadem, the crown

on a monument—a glory
wreath. That is what I saw

as I drove the flat land—down
Highway 49—toward home.

Up close now, beneath it, I see
what I had not: a circle of thorns.

At first, there was nothing to do but watch.
For days, before the trucks arrived, before the work
of cleanup, my brother sat on the stoop and watched.

He watched the ambulances speed by, the police cars;
watched for the looters who’d come each day
to siphon gas from the car, take away the generator,

the air conditioner, whatever there was to be had.
He watched his phone for a signal, watched the sky
for signs of a storm, for rain so he could wash.

At the church, handing out diapers and water,
he watched the people line up, watched their faces
as they watched his. And when at last there was work,

he got a job, on the beach, as a watcher.
Behind safety goggles, he watched the sand for bones,
searched for debris that clogged the great machines.

Riding the prow of the cleaners, or walking ahead,
he watched for carcasses—chickens mostly, maybe
some cats or dogs. No one said remains. No one

had to. It was a kind of faith, that watching:
my brother trained his eyes to bear
the sharp erasure of sand and glass, prayed

there’d be nothing more to see.

The house is in need of repair, but is—
for now, she says—still hers. After the storm,
she laid hands on what she could reclaim:
the iron table and chairs etched with rust,
the dresser laced with mold. Four years gone,
she’s still rebuilding the shed out back
and sorting through boxes in the kitchen—
a lifetime of bills and receipts, deeds
and warranties, notices spread on the table,
a barrage of red ink: PAST DUE. Now,
the house is a museum of everything

she can’t let go: a pile of photographs—
fused and peeling—water stains blurring
the handwritten names of people she can’t recall;
a drawer crowded with funeral programs
and church fans, rubber bands and paper sleeves
for pennies, nickels, and dimes. What stops me
is the stack of tithing envelopes. Reading my face,
she must know I can’t see why—even now—
she tithes, why she keeps giving to the church.
First seek the kingdom of God, she tells me,
and the rest will follow—says it twice

as if to make a talisman of her words.

He has the surname that suggests
a contested kinship: Jefferson—
the name, too, of this dead-end street
cut in half by Highway 49. Here,
at the corner where it crosses Alabama,
he’s perched on the stoop, early evening,
at my cousin Tammy’s house, empty
bottles at his feet. When he sees me
opening the gate, walking up smiling,
he reads me first as white woman, then—
he says—half-breed. It’s my hair, he tells me:
No black woman got hair like that,
and my car, a sedan he insists
the cops don’t let black people drive,
not here, not without pulling them over
again and again. He’s still wearing
his work uniform—grass stains and clippings
from the mower he pushed all day—
and his name tag, a badge, still pinned
to his collar. He tells me he’d swap the badge
for one from another boss, switch jobs
if he could get more pay; says
his boss has plenty of money: cheese,
he calls it—Man’s tight with it, he squeak
when he walk. So Roy waits, biding
his time, he says, till the Lord bless me
with something else. When he goes quiet,

I ask him the easy question—one I know
he’s been asked a hundred times—
just to hear him talk: Where were you
during the storm? That’s when he tells me
what he hasn’t this whole time, holding it back
maybe, saving it for the right moment:
I got a baby with your cousin Tammy’s sister—
that makes us kin. You can’t run
from the Lord. I don’t know what he sees
in my face, but he grins at me, nodding.
White girl, he says. You gone come
see my baby, come up to the country
where we stay? He’s walking away now,
a tall-boy in his hand. I’m trying to say,
yes, one day, sure, but he’s nearly gone,
looking back over his shoulder, shaking
his head, laughing now as he says this:
When you waiting on kinfolks,
you be waiting forever.

I.
Once, I was a daughter of this place:
daughter of Gwen, granddaughter
of Leretta, great of Eugenia McGee.

I was baptized in the church
my great-aunt founded, behind
the drapes my grandmother sewed.

As a child, I dozed in the pews
and woke to chant the Lord’s Prayer—
mouthing the lines I did not learn.

Still a girl, I put down the red flower
and wore a white bloom pinned to my chest—
the mark of loss: a motherless child. All

the elders knew who I was, recalled me
each time I came home and spoke
my ancestors’ names—Sugar, Son Dixon—

a native tongue. What is home but a cradle
of the past? Too long gone, I’ve found
my key in the lock of the old house

will not turn—a narrative of rust;
and everywhere the lacuna of vacant lots,
For Sale signs, a notice reading Condemned. 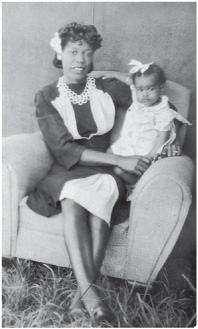 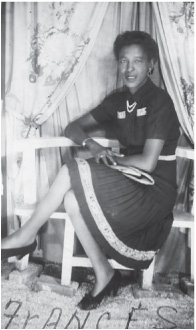 II.
I wanted to say I have come home
to bear witness, to read the sign
emblazoned on the church marquee—
Believe the report of the Lord—
and trust that this is noble work, that
which must be done. I wanted to say I see,
not I watch. I wanted my seeing to be
a sanctuary, but what I saw was this:
in my rearview mirror, the marquee’s
other side—Face the things that confront you.

My first day back, a pilgrim, I traveled
the old neighborhood, windows up,
steering the car down streets I hadn’t seen
in years. It was Sunday. At the rebuilt church
across from my grandmother’s house,
I stepped into the vestibule and found
not a solid wall as years before but
a new wall, glass through which I could see
the sanctuary. And so, I did not go in;
I stood there, my face against the glass,

watching. I could barely hear the organ,
the hymn they sang, but when the congregation rose,
filing out of the pews, I knew it was the call
to altar. And still, I did not enter. Outside,
as I’d lingered at the car, a man had said
You got to come in. You can’t miss the word.
I got as far as the vestibule—neither in,
nor out. The service went on. I did nothing
but watch, my face against the glass—until
someone turned, looked back: saw me.