Helicopters, keys, whirly-gigs; whatever you call them, the seeds that rain down from maple trees are magical. As children my siblings and I would divide the two-parted seeds down the middle, then split them open and remove the tender bright green morsel within. The remaining sticky surface made a glue perfect for adhering the seed cover to our noses, turning us into miniature Pinocchios. It seems to be a lost art among today’s children, who also don’t know how to test for butter appreciation with a buttercup flower.

You don’t have to stick the maple seeds on your nose to be entertained by them, however. Just take advantage of that one perfectly calm, warm spring day when the seeds swirl down magically one after another. Ripe seeds will fall, of course, but what makes a particular seed fall exactly now, or … now, or an hour from now? That is among the mysteries of nature we rarely have the time or patience to uncover. But we can be there to witness them just the same: the maple rain. A friend once stopped by my house for a visit on a maple rain day. I wasn’t home, so he sat and watched the spectacle for an hour before he left. Lao-tzu would agree that his time wasn’t wasted. “Teaching without words and work without doing / Are understood by very few,” he wrote.1

Aside from being entertaining, maple trees are interesting because they are precocious— they are in a hurry to do everything. To some people the first sign of spring is blooming forsythia or daffodils, but to me it is the flush of red in the tops of the red maple (Acer rubrum) trees. A closer look will show that the red blush is produced by many tiny red flowers. It is not uncommon for maples to bloom while night temperatures are still below freezing. The trees are in a hurry because their plan is to be producing seed while other trees are just awakening from their winter sleep.

Most eastern trees flower in the summer and drop their seeds in fall, and the seeds germinate the following spring. But the maple does everything double-time: flowering while it is still practically winter and dropping seeds in the spring. The seeds germinate that same spring. It’s a clever strategy because the seeds are not exposed to the hungry animals that eat seeds all winter long. But this early schedule does in fact benefit animals by providing energy for the tasks associated with springtime breeding. I have seen squirrels and birds eating the tiny, nectar-rich flowers; and I have seen squirrels eagerly peel apart the immature fruits to get at the tender green seeds within. Such sweet, fresh food must taste wonderful to them after the long winter— like fresh-from-the-garden spring greens taste to humans. 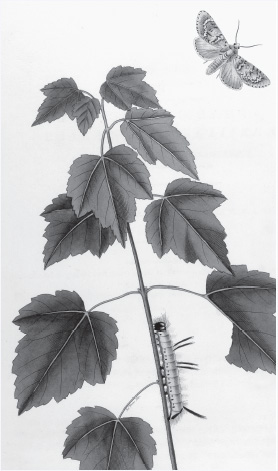 Red maples are also unique for another reason— something botanists call the “red maple paradox.” The paradox is that red maple trees are increasing in abundance across the eastern part of North America and no one knows exactly why. Early land surveys recorded red maples as a minor component of the forest, typically less than 5 percent of the trees. In those same areas today, red maples are a dominant tree in the forest. Marc Abrams, who has studied this paradox, says that red maple is now one of the most widespread and abundant tree species in the eastern United States.2

The most likely cause for the red maple’s population explosion is the fire suppression we have been practicing for more than a century. A fascinating controversy is currently raging over how Native Americans influenced the structure of the forests prior to their “discovery” by European explorers and settlers; there is consensus, however, that fire was a frequently used tool.3 Because red maples are much more sensitive to fire than oaks and other species, the early lack of maples could be a reflection of the burning practiced by native people for hunting or managing the forest. The subsequent reduction in burning after the native peoples were driven out or restricted to reservations allowed red maples to prosper.

We have not yet exhausted the list of possible explanations for the paradox. Red maple trees can produce chemicals that are distasteful to forest tent caterpillars and gypsy moth caterpillars, the two most serious tree defoliators in eastern North America. Oaks, which do not produce the chemicals, are at the mercy of these two species. Perhaps the oaks are being preferentially weakened as a result. And since gypsy moths are rather new on the scene—they first escaped into the forests of Massachusetts in 1869— this could explain the shift in forest composition. Is the reason for the increase in red maples due to fire suppression, deer, or caterpillars— or something else? A paradox indeed.

RED MAPLES do not live for three or four hundred years like oaks and beeches, but they can live for two hundred years. There is a little, privately owned corner of land near here that contains a grove of the biggest, oldest red maple trees I have ever seen. I think of those trees often and wonder if the owners know what a treasure they have. Someday I’m going to ride over there and tell them. I hope I’m not too late.